The First Golf Clubs in America: First Shipment of Clubs to America Painted

Carrol Ezell’s painting of the historical arrival of the shipment of golf clubs and balls from Leith, Scotland, to the colonies by way of David Deas of Charleston, SC, in 1743, shows the opened crates on board with a harbor view. The inscription includes details of the historical event: David Deas the recipient, May [10th/16th/18th(?)], 1743, 96 clubs and 432 balls.

My question is why is the crate opened? From the windowed cabin, it would seem that these are in the captain’s quarters at the stern. So perhaps, a Leith or Fife-man himself, he was grooving his swing during the long voyage across the Atlantic, perhaps even sending a few rounded wooden balls out into the sea off the main deck!

The first American golf club, the South Carolina Golf Club, was formed in 1786 and played on the Harleton Green. Local South Carolina low country resident Barbara Shipman was commissioned to paint the scene [in the style of the period]. This can be seen on flyleaf cover of the book Golf Charms of Charleston by Joel Zuckerman.

The First Golf Clubs in America: a full set of golf clubs from 1840s 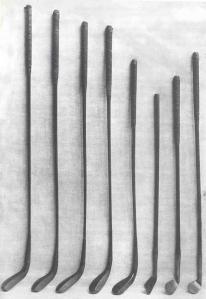 This is a typical looking of a full set of golf clubs from as early as in the 1700s and on through the 1800s. 5 or 8, or so, of these would be loosely carried in the arm or by a caddie. This particular set is dated to the 1840s, but the “long-nose” clubs and a couple irons are the typical make for a long time in the history and play of golf.
The “technology” for the craftsmenship of these early clubs was developed from archery equipment making and blacksmithing. It is interesting to note that these craftsmen would have been making a lot of equipments for military use, and thus the earliest documentation of golfing [in Edinburgh, Scotland] was the forbidding of golf play and football play on the archery military practice range.

The first set of clubs shipped over to the Americas in 1743 that arrived in Charleston, SC, would have looked very similar.